Home > Family > Getting the Best Deal on Your Holiday Money

Getting the Best Deal on Your Holiday Money 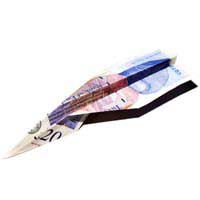 With the pound recovering in value (it recently hit its highest level versus the euro for almost two years) now is a good time to convert your holiday money. If, however, you wish your money to go even further, here are some useful suggestions.

Saving Money Throughout the Year

Many people book their summer break months in advance, but forget about their holiday spending money until they are about to go away. If you do this, you may be tempted to borrow the money, and end up paying more to do so. Instead, start putting some money aside, perhaps in a special ‘holiday money’ savings account, when you book your holiday which will avoid you having to play catch up closer to your time of departure.

Shop Around for Exchange Rates

The foreign exchange market is big business. On average, a Briton spending money abroad will convert more than £1,000 in spending money. Yet despite the amount of money we are prepared to spend, most travellers still fail to shop around for the most favourable exchange rates.

Instead of going to your local bank branch or a high street exchange, it is well worth going online to look up the exchange rates of online currency specialists.

Because they do not have to pay for shop premises they can pass on their savings directly to customers in the shape of more competitive exchange rates.

Online comparison websites are also useful in that they do the research and comparison of rates on your behalf. Bear in mind, however, that exchange rates are separate from commission rates, so that any foreign exchange highlighting their ‘no commission’ offers may not have the best exchange rate.

A surprising number of travellers fail to get their travel money organised in advance of their trip and rely on the airport bureau de charge to get their currency. This can be costly.

According to comparison website moneysupermarket.com, ordering 1,000 euros from an airport bureau de charge costs £53 more than it would if you had pre-ordered your currency in advance and collected it from the airport.

Use a Prepaid Card

If you are travelling on a tight budget then one of the best ways to ensure that you keep your holiday costs down is to get a prepaid currency card. These cards work much the same as a credit card, although you can ‘load’ them with a set amount of money that is then converted into the currency of your choice.

You are then able to use the prepaid card to pay for goods or services, or to withdraw money from local ATMs.

They have the additional benefit of being safer to carry than large sums of cash (if stolen you can simply have the card cancelled and your card balance is safe).

They are also a lot cheaper, usually with a flat withdrawal fee that is a lot lower than those applied by banks or high street exchanges.

Be Selective When Using Credit Cards

Credit cards are accepted the world over, but this convenience usually comes at a price. Every time you use your credit card abroad your card provider will usually charge you a ‘conversion fee’ of between 2.5% and 3%.

If you are paying for meals and for shopping each of these fees can quickly mount up and add a hefty conversion charge onto your next credit card bill.

Whatever cards you have it is worth checking what fees they charge so that you can minimize the charges you have to pay whilst abroad.

Resist the Temptation of Paying in Sterling

Some overseas retailers offer UK customers paying by credit card the option to pay for goods and services in sterling, instead of the local currency. This is known as ‘dynamic currency conversion’ and while it may sound like a good idea, it usually works out as an expensive luxury.

The retailer will apply their own exchange rate to the transaction, usually far higher than the standard rate you would pay via your own credit card.

Saving for a New Family