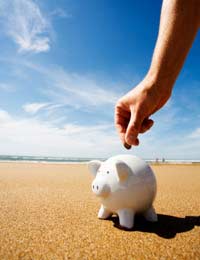 If you are planning to move or retire abroad, or if you are already living in another country, then you may find it useful to open up an offshore bank account.

Offshore banking simply means banking or investing in a country or jurisdiction other than the one in which you live.? In this case study we look at how some one about to start work overseas can set up a bank account and the key points to consider.

Jamie is 28 years old and works as an engineer with a large multinational oil exploration company. He’s been offered what he calls ‘the job of a lifetime’, a freelance contracting role that will put him in charge of his own exploration team, based in Dubai and working in a variety of different countries worldwide.

Dubai in the United Arab Emirates is one of the world’s fastest growing employment locations. Anyone looking to work in Dubai requires both a residency visa and a work permit before they leave their home country. Jamie was pleased that his employer was sorting his work permit and residency visa out on his behalf.

Having agreed to take the role, Jamie now needs to work out how to set up his own offshore bank account.

Jamie explains: “My new job will see me working in a number of different countries and there’s the possibility that I will be paid in various currencies. I need an offshore bank account that will give me full access to my money wherever I am. I also want to be able to repay my credit card debts and personal loan and send money back home from time to time.”

Once Jamie signed his new contract of employment, he decided to talk to his local bank, to talk about his decision and what steps he needed to take. Jamie said: “I have to admit I didn’t really have a clue how to go about getting my finances in order. I didn't even know what the local currency in Dubai was!

“I’ve had the same bank account since my university days and have always been happy with their service, so I decided to hear whether they could transfer my account to a Dubai branch.”

However, Jamie’s local branch adviser explained to him that the process would involve more than simply swapping his current branch for another one in a bank in Dubai.

The bank had its own specific ‘offshore bank account’ setup process, offering customers such as Jamie a choice of specialist offshore jurisdictions, such as Jersey, the Isle of Man and also the Channel Islands.

Jamie said “I chose a US Dollar International Account, because my firm will be paying me in dollars. However, my bank also advised me to set up a local account, set up for me in Dirham, the currency of Dubai.”

Jamie avoids paying charges to convert his salary into a different currency by having it paid directly into his international account. Then Jamie simply transfers a set amount of money at the beginning of each month into his local account to use on a day to day basis. When he travels to different countries he is able to use the bank’s money transfer facilities over the Internet.

Whatever time zone he's working in, Jamie can manage his day-to-day finances (such as direct debits and standing orders) online. He can also move money between his dollar, sterling and Dirham accounts at the click of a mouse.

Jamie explained: “Setting up my offshore accounts was a very simple process, and the bank handled all my official tax domicile forms for me. Having a US dollar account makes life easier when I am travelling. Also, with the improved exchange rate these days my money is worth more when I send it home.

“Working in a country where I don’t have to pay income tax means that I have almost paid off all my debts and I’ll soon be able to start saving up a deposit on a house for when I eventually decide to move back to the UK.”